Delhi, Jan. 19 – “Dada Saheb Phalke was the visionary who propagated ‘Make in India’ and brought `Aatma Nirbhartha’ to the Indian cinema sector. In his films, he always used local artists and propagated the inclusion of indigenous locations and technical support which were indigenously available. As a result of Dada Saheb’s persistence, vision and patriotism, Indian cinema industry is standing high today.” This was told by Chandrashekhar Pusalkar, grandson of the father of Indian Cinema Dada Saheb Phalke aka Dhundiraj Govind Phalke, in a free-wheeling interaction with Ms. Shamila K.Y., of the Press Information Bureau. Chandrashekhar is the son of Dada Saheb’s daughter Malati.

Speaking on the side-lines of 51st edition of International Film Festival of India (IFFI) in Panaji, Goa, which pays homage to Dada Saheb on the occasion of his 150th birth anniversary, Shri Pusalkar said that the Phalke family is grateful towards the Government of India and IFFI for its efforts to keep the memories of Dada alive. “These efforts by the Government are proving fruitful as the young generation is having an idea on how a man started his journey of film-making from scratch.”

Efforts by Government are a great tribute

Dada Saheb Phalke Award was instituted by the Government of India in 1969. Thanking the government for the same, Shri Pusalkar said, “If the government had not taken such an initiative, my grandfather’s work or life would have been ended in two pages, but now, people know him and respect him for his immense contributions for Indian Cinema.”

Reminiscing the sacrifices made by his grandfather, Shri Pusalkar added that respect is going up among the new generation when they come to know how a man, who did not have any facilities which they are enjoying now, made films and paved a path for generations to come. “He had no money, no insurance policy, he sold my grandmother’s ornaments and bought everything for his films. My grandmother and the entire family supported him immensely.” 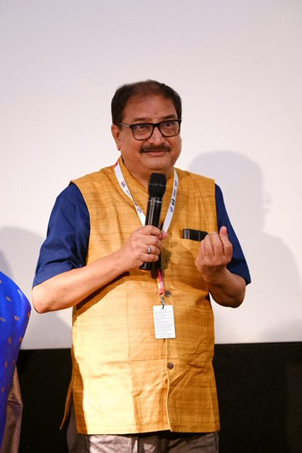 He added that in that sense entire Phalke family are the pioneers of Indian Cinema.  Evoking the memories shared by his mother, Shri Pusalkar said, “My grandmother supported grandfather in every step he took in that era and in fact Dada made her a part of all his films. He taught her how to develop and roll a film and how to shoot as well. In those times, there were no reflectors and they used to shoot under the scorching sun and in all these, my grandmother stood as rock-solid support for my grandfather.”

Sharing his wish to have more recognition for his grandmother as well who stood shoulder to shoulder to his grandfather, Shri Pusalkar said, “My grandmother, Saraswatibai Phalke can be termed as a woman achiever who made immense contributions for Indian Cinema in her own way.”

Recollecting his memories of his grandfather, Shri Pusalkar added, “My grandfather was not only a great visionary but a great patriot too.” He recalled an incident as to how, after screening some of his films in London, Dada Saheb got an offer to work there. “He politely declined the offer stating that his country, where cinema was just at a nascent stage, needed him more.”

As per Shri Pusalkar, due to his grandfather’s dedication towards cinema, he was never bothered about making money. “Our grandfather has left behind a monumental legacy. He made a huge investment for us. We are receiving all the standing ovations, clapping on his behalf and we are being respected and honored so much only because of his contributions”, said an emotional Shri Pusalkar.

Detailing how Dada Saheb can be an inspiration for new-age filmmakers, Shri Pusalkar said, “My grandfather was so loving and caring towards his family, yet he was strictly disciplined at work and at home. Regarding his films, he meticulously planned everything. He always believed that there is no age bar for learning anything as he continuously engaged himself in learning new things”. He proudly added that this is what the young filmmakers should imbibe from him – “there is no age for learning things.”

Elaborating the efforts being made by his family to propagate more about Dada Saheb’s contribution, Shri Pusalkar talked about the Dada Saheb Phalke International Awareness Mission. “It’s a humble mission to spread awareness about Dada Saheb to the rest of India and to the world as a whole,” he said. “There is a dedicated website for that – http://www.dpiam.org.in, where one can find all information about my grandfather.”

Adding some of the golden moments from Dada Saheb’s era, Shri Chandrashekar said Dada Saheb was not only a pioneer in film making, but in advertising and promotion too, in which he always practised innovative ways. “He had special concern for student viewers and he used to give special passes to encourage more women to watch his film.”

While sharing his wish to have more recognition for his grandfather, Shri Pusalkar said, “The occasion is right as it’s the 150th birth anniversary of my grandfather and a befitting recognition would come by conferring upon him the title of Bharat Ratna posthumously, and also the film industry should seriously think about making a biopic on him,” he added.

“Celebrities will come and go, but as long as cinema is there, Dada Saheb Phalke will be remembered,” Shri Pusalkar added as a parting note.