A state-level programme and interactive session was organized by the Information and Public Relations Department here today on the occasion of National Press Day on the subject ‘The role of Media in Nation Building’. Principal Secretary of Information and Public Relations Department Subhasish Panda presided over the event as the Chief Guest. Senior journalist and Editor of Hill Post Shimla Ravinder Makhaik and State Bureau Chief of Amar Ujala Suresh Shandilya were present in the program as keynote speakers.

On this occasion, while congratulating the media on National Press Day, Subhasish Panda urged the media to inculcate the spirit of nationalism among the citizens and to bring continuous positive changes for the betterment. He said that the role of the media in nation-building is very important in the present scenario. Presently with the use of technology, there has been an increase in the facility and means of dissemination of information. But many new challenges have also emerged. He said that various mediums of media are playing an important role in empowering the nation. The positive issues raised by the media infuse new energy and enthusiasm in every person. He appreciated the efforts made by the media in the communication of information and maintaining faith in the nation’s capability among the citizens during Covid-19.

Earlier, the Principal Secretary welcomed the main speakers of the program.

Ravinder Makhaik in his keynote address said that at present there has been an increase in the mediums of media. With the globalization of resources, vibrant media continues to play an active role in building India into a modern nation-state. India’s policy of helping other nations in securing Made in India vaccines was highly acknowledged in the global media during Covid-19. 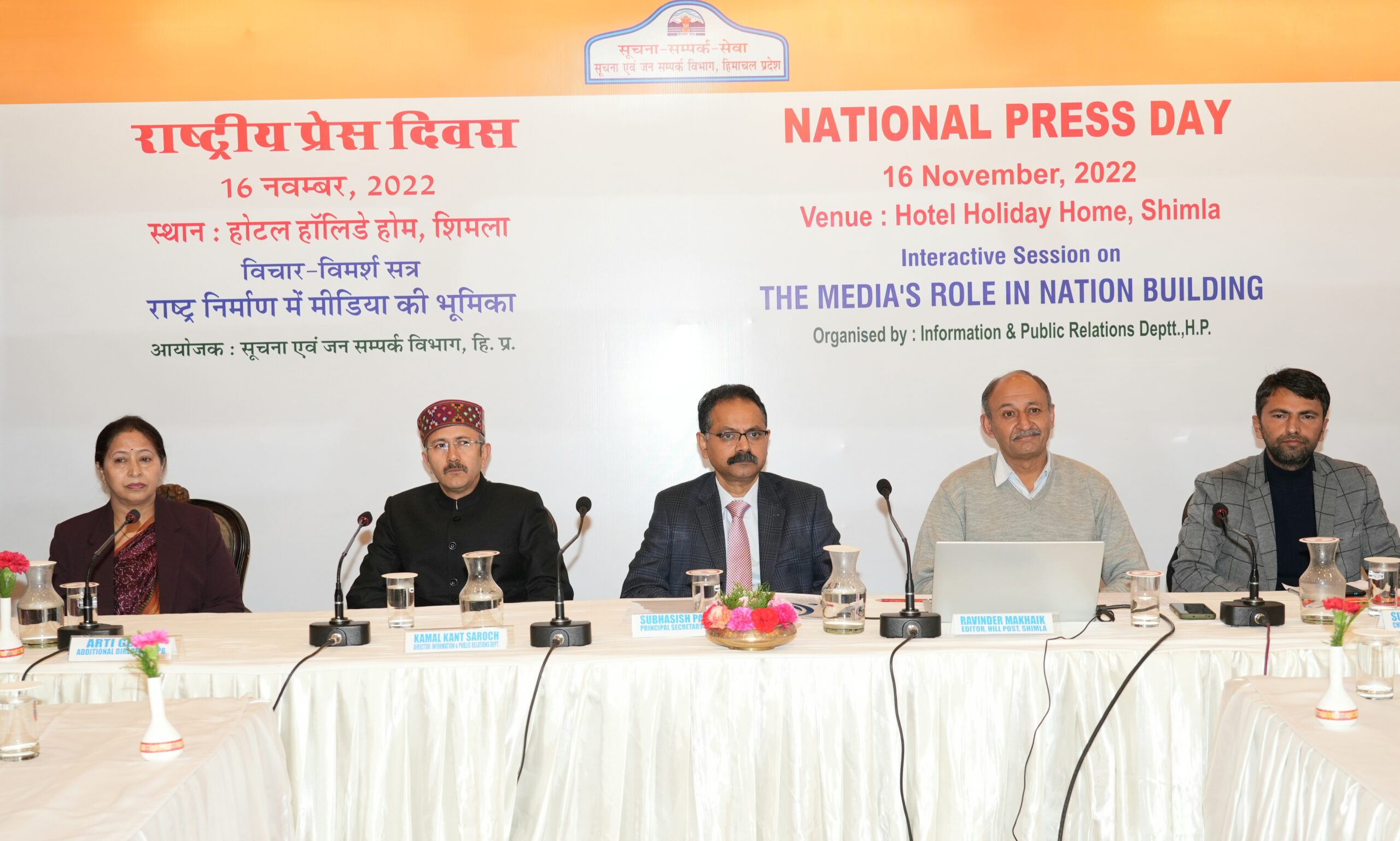 He said that the backing of a strong media narrative is necessary for the social, economic and political development of the modern nation-state. The media’s role in nation-building during the country’s freedom struggle has its own significance. Media holds the responsibility of presenting events in their original form. New global media platforms need to rise from India that tells India’s story. As a messenger of information, the media manage global public opinion which is an important aspect of nation-building.

Suresh Shandilya on this occasion said that freedom fighters utilized the media to awaken people to attain freedom and the cause to make people aware is still carried by the media. He said that the media has an important place among the four pillars of democracy. The Press Council of India (PCI) was constituted with the aim to protect freedom of speech and maintain high standards of the press. The discussions on the subjects provided by PCI are apt platforms for media persons for self-evaluation. The speed of communication of information through various means of media is increasing. Media is constantly trying to bind society in one thread and is nurturing the elements of nation-building. He said that the media has a deep connection with literature which makes a person sensitive. The efforts made by the media to inform people are important for nation-building.

Welcoming the chief guest and speakers by presenting them with Himachali shawl and cap, Director of Information and Public Relations Department Kamal Kant Saroch threw light on the importance of National Press Day. He said that the media projects the real picture of a country in respect of social, economic and cultural aspects. Besides monitoring social events and conditions, the media plays an important role between governments and the public. Media doesn’t only hold the responsibility of providing information but should also create awareness among the public in large. Media has an important role in nation and society building along with maintaining high values in people.