“The enemies are only 50 yards from us. We are heavily outnumbered. We are under devastating fire. I shall not withdraw an inch but will to our last man and our round”.

A National Symposium & Exhibition on “MEMORIES OF 22 OCTOBER 1947” is being organized by the National Museum Institute of History of Art, Conservation & Museology(NMI), at SKICC, Srinagar, Kashmir. The National Symposium, a two-day event, is being held on 22 & 23 Oct 2020. The Exhibition will commence on 22 Oct 2020. Lt. Governor of Jammu & Kashmir, Shri Manoj Sinha will be the Chief Guest of the program. Union Minister of Culture and Tourism (I/C) Shri Prahlad Singh Patel will grace the occasion via a web presence. The Chief Secretary, Jammu & Kashmir, Shri B. V. R. Subrahmanyan, and the Secretary, Ministry of Culture, CEO, DMCS and VC, NMI Shri Raghvendra Singh will also be present on the occasion.

22 October 1947 has marked Indian history with pieces of evidence of betrayal and a legacy of valor. On 15th August 1947, India attained Independence after being subjugated to the colonial regime for almost two hundred years. At its birth as a young independent nation in 1947, one of the most protuberant difficulties India was forced to face was the choice given to the erstwhile Maharajas of India to be an independent country, or to a part of India or to be a part of Pakistan. To quote Shri Raghvendra Singh, Secretary Ministry of Culture, ‘For Mohammed Ali Jinnah and his newly created Pakistan, it would completely negate his two-nation theory if the princely state of Jammu & Kashmir decided to opt for India.’ On 22 October 1947 Pakistan invaded Kashmir. The invasion, ‘Operation Gulmarg’ was the result of months of planning and involvement of the topmost leaders of Pakistan including Pakistan’s then Prime Minister, Chief Minister of the Northwest Frontier, Members of the Muslim League and Pakistan Army. 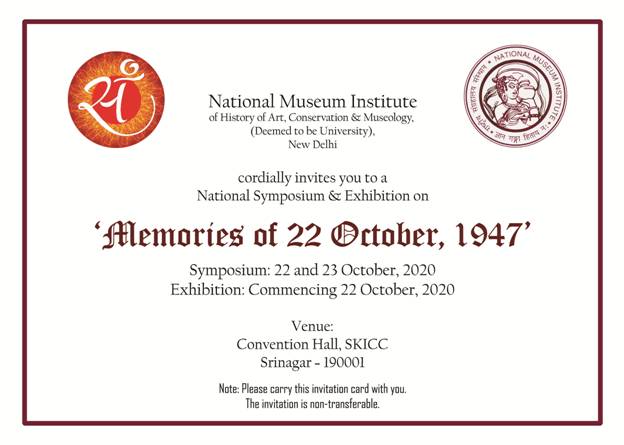 The Tribal Militia invasion of Kashmir backed by Pakistan army on 22 Oct 1947 unleashed a brutal series of plunder, rape, arson, looting and killing. The invasion marks the beginning of the First Indo-Pak war and sets in motion a chain of events that are still affecting the country. On 26 Oct 1947, the State of Jammu and Kashmir formally acceded to India and on 27 Oct 1947 Indian troops were airlifted to Kashmir. From 22 Oct 1947 onwards till the intervention of the Indian Defense Forces all days in Kashmir were blackened with the horrifying stories of mass plunder and vandalism where many lives were lost to the insatiable ambition of the invading Tribal Militia. During this need of the hour, many willing individuals rose up to the occasion and faced adversity with commendable will and bravery.

The evidence of the treacherous attack by Pakistan, stories of resistance and bravery of Kashmiris, the narrative of Indian Army victory over the invaders need to be told to people. The two-day National Symposium on 22 & 23 Oct 2020 and the Exhibition commencing on 22 Oct 2020 is an attempt to deliberate upon the records and history of this deceitful attack and the subsequent victory of India.

The Exhibition on the ‘Memories of 22 Oct 1947’ comprises of graphic panels and videos showcasing a chronology of events as well as prominent narratives of the invasion on 22 Oct 1947 and subsequent unfolding of actions. The exhibition panels depict – The Treaty of Lahore, The Treaty of Amritsar, The Popular Will of 1947, Economic Blockade of Kashmir, 1947- Towards Accession, The Invaders Backed by Pakistan, Pakistani Militia Leaders, Plunder in Muzaffarabad, Baramulla, The Church Attack, MaqboolSherwani, the Hero of Baramulla, Instrument of Accession, Key Dates, The Gilgit Game, People’s Militia.

The National Symposium and Exhibition on the ‘Memories of 22 Oct 1947’ will outline shapes and contours of a future museum on the historical theme.