The Union Minister of Science and Technology and Earth Sciences, Dr. Harsh Vardhan today inaugurated the DME fired “Aditi Urja Sanch” unit along with the DME-LPG blended fuel cylinders and handed them over for common public and CSIR-NCL (National Chemical Laboratory) canteen use on a trial basis at CSIR-NCL premises virtually through video-conferencing. 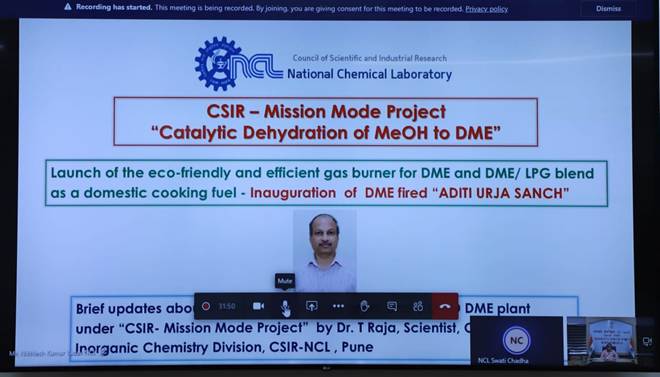 Dr. Harsh Vardhan, in his address, said, “The launch of this burner will also provide a significant boost to the ‘Make in India’ campaign as all the manufacturers of cylinders, gas stoves, regulators, and gas hose are domestic. This kind of activity may bridge the gap between demand and supply, and it can ensure energy security for the nation.” Dimethyl ether (DME) is an ultra-clean fuel. CSIR-NCL has developed nation’s first kind of DME pilot plant with 20-24Kg/day capacity. The conventional LPG burner is not suitable for DME combustion as DME density is different than LPG. To address this issue, CSIR- NCL’s “ADITI URJA SANCH” has come up with a helpful, innovative setup. The new Burner is fully designed and fabricated by NCL for DME, DME -LPG blended mixtures and LPG combustion. 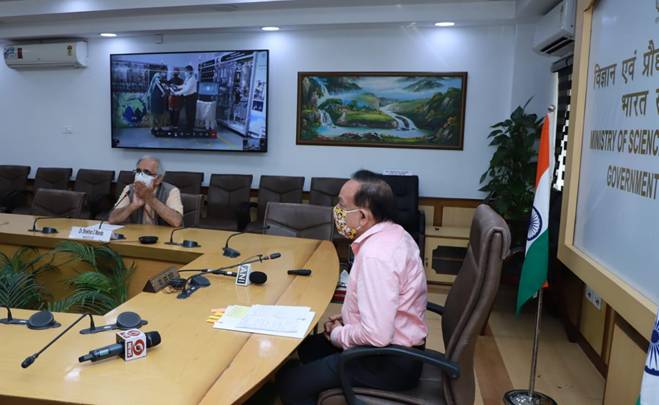 d.         The angles at which nozzles are placed maximize the heat transfer area across the utensils.

f.          The length of the flame (high, low, and medium) can be adjusted by altering the oxygen ingress.

g.         The experiment shows that it increases the heat transfer rate as well.

The research group led by Dr. T. Raja at Catalysis and Inorganic Chemistry Division, CSIR-NCL, Pune carried out research and found catalysts with higher yield, and stability for the ether formation and less tendency to produce carbon soot by-product. The DME project is moving on fast track mode from the laboratory to the market to ultimately reach people under the methanol economy and green sustainable fuel policy of the country. In the current phase, CSIR sponsored FTT/ FTC (Fast track Commercialization) project for the pilot plant demonstration has been sanctioned, and CSIR-NCL is in advanced discussion with various industry stakeholders.

A clean cooking fuel combination of DME-LPG also safeguards the well-being of women and children. The DME process technology is economical, cost-effective, and scalable with in-situ product purification as well as a heat integration unit that produces pure DME. This technology developed by CSIR-NCL at present has the capacity of 20-24 kg/ day DME production. It is to be scaled up to 0.5 Ton per day through the CSIR-FTC project. The DME pilot plant was inaugurated last year by  Dr. Harsh Vardhan at CSIR-NCL.

The newly designed stove can burn with up to 30 % DME blended with LPG or 100% DME as fuel. The air to fuel ratio is different for DME blended fuel to achieve optimum combustion and thermal performance. A 20% DME blending with LPG, with fewer infrastructure changes, is expected to result in substantial savings annually. The DME from Methanol process developed by CSIR-NCL is producing 20-24 kg/ day. This economical, cost-effective process will be scaled up to 0.5 Ton per day through CSIR-FTC project. CSIR-NCL plans under “Aditi UrjaSanch” to launch in future industrial burners for low emission, DME/ DME blended fuel for automobiles and stationery power.