Several premier academic institutions in India will soon partner in indigenous assembling and manufacturing to establish supercomputing infrastructure in the country and make the facilities available at an affordable cost.

Centre for Development of Advanced Computing(C-DAC) under the Ministry of Electronics and Information Technology(MeITY) signed a total of 13 MoUs with the premier academic and R&D institutions of India for establishing Supercomputing Infrastructure with Assembly and Manufacturing in India and Critical Components of National Supercomputing Mission in a virtual ceremony held on 12th October 2020.

Shri Sanjay Shamrao Dhotre, Minister of State for Electronics and Information Technology, stressed that the MoU signing with the premier institutes marks the being of ‘Aatmanirbhar Bharat’ and expressed his satisfaction over the progress made in the National Supercomputing Mission initiated by the Department of Science and Technology (DST) and Department of Electronics and Information Technology (DeitY) through Centre for Development of Advanced Computing (C-DAC) and Indian Institute of Science (IISc), Bangalore.

Prof. Ashutosh Sharma, Secretary Department of Science & Technology, mentioned that the signing of 13 MoUs shows the speed that the mission has picked up, and it is a major boost to computing facility. “In the last 5 years, major changes took place in the mission where the emphasis was given on design and fabrication of hardware and software of the supercomputers in India. It is indeed on the lines of the clarion call of ‘Atmanirbhar Bharat’ given by Prime Minister,” he added.

“Supercomputing is the key to so many areas like Computational Biology, Molecular Dynamics, National Security, Computational Chemistry, Cyber-Physical Systems, Big Data Analytics, Government Information Systems, and so on. Armed with artificial intelligence and machine learning makes it a formidable tool. Progress in this mission will break silos to empower people and make India future-ready and tackle future challenges,” he added. 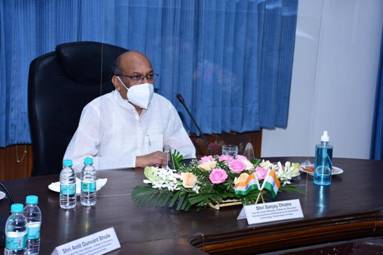 ic and R&D institutions to spread over the country by installing a vast supercomputing grid comprising of more than 70 high-performance computing facilities. The mission also includes the development of highly professional High-Performance Computing (HPC) aware human resource for meeting the challenges of development of these applications. The mission implementation would bring supercomputing within the reach of the large scientific & technology community in the country and enable the country with a capacity to solve multi-disciplinary grand challenge problems.

The mission is implemented and steered jointly by the Department of Science and Technology (DST) and Department of Electronics and Information Technology (DeitY) at an estimated cost of Rs.4500 crore over a period of seven years to make India one of the world leaders in Supercomputing.